Recently I was discussing writing mechanics with some other authors and the discussion turned to the through line concept, an item that I had not consciously considered, probably owing to my lack of formal writing education. The through line, they explained, is that concept/idea/view/attitude that pervades a piece of work and imparts the overall meaning to the tale.

"The plot?" I responded to gales of laughter (well, perhaps a snicker or two) before being corrected. It seems that the plot is the sequence of actions that tie the beginning to the end and allows the reader to navigate the story.  The plot is mediated by the through line, even if that line is never explicitly expressed.
When you bridge a chasm the first action is to cast a stringer line across.  This is the thread that allows the heavy cables, which support the girders, that allow the paving that forms the final bridge.  The through line is that stringer, a line that guides the cables of plot and supports the structure of scene, setting, and characters to trace the story.

You won't see the stringer in the final story, but it is there and as essential as all the other material.

Why are we so forgiving of bad language use in conversation and so upset when we see it in print? Is there some part of the human brain that subconsciously translates halting, error filled, and staccato conversational bursts into proper meaning?

We hear real conversations all the time.  Their sentences are punctuated by "uhs" and "ahs" throat clearing, coughs, and disconnected diversions that  usually start with a "by the way" or "hey, do you remember" expressions that signal a shift of focus.  Bursts of speech are seldom structured nicely, parsed into well-formed diagrams, or even grammatical.  No, instead the ways we talk are idiosyncratic, messy, untamed, gabble that would drive our poor English teachers around the bend.

Dare I mention inappropriate or misguided word choice? Or how about the awkward pause when the word you want is there, just on the tip of your tongue but you cannot bring it to mind and stand agape, mouth hanging open as your brain concentrates on the WORD instead of productively working on the idea you were trying to get across. Of course the word eventually arrives, but usually far too late to be effective.

Then there are the jack rabbits; those whose conversational veers take the exchange to ever-new subject areas and seldom loop back to the original conversational thread.  You might start talking about the latest novel by ". oh, and did you know that so-and-so broke up with... she's the one who... you do remember him, don't you, the one with that book whose title I can't recall, but it was like the big one that won the award in Chicago, which is really interesting because when I was visiting Sheldon - you do remember him, don't you, the guy....."  On and on it goes, leaving we more pedestrian speakers with brain fatigue from struggling to chase the meandering quarry and wrest comprehension from its grasp.

But the world of novels and short stories do not recognize any of these human communications modalities.  Instead literature's dialogue is usually grammatically correct, properly structured, and always uses the right word at the proper time.  People in stories rarely digress, interrupt, or even mess up their language unless their writer deliberately and with malice aforethought chooses to savage them to establish a plot point.  Even those who dally with dialect do so in short spurts and "normalize" the dialogue after the character's linguistic foibles have been established in the reader's mind, This latter is done because digression from proper speech always rankles the reader and abruptly pulls them out of the story.

Why do we tolerate so much misuse of language in our daily life yet expect perfection in our stories?

Posted by Bud Sparhawk at 7:37 AM No comments:

oblivoids |əˈblivoyds|Noun: Person who is not aware of or concerned about what is happening around them:  Origin late American English: from Latin obliviosus, fromoblivio(n-).
You see them everywhere: the driver who dawdles at the light, the person who ignores the turn lane only to dart in front of you at the last moment, the woman who waits until her groceries are rung up before searching for her wallet, checkbook, or whatever, the bank patron who has a lengthy conversation with the teller despite the growing line behind them, the ....

Why go on. We all see them.  We all swim downstream of their inconsiderate effluvia.  We find precious moments of our too short lives wasted as others blithely dawdle in their own ignorance. Who are these people, these time thieves, these inconsiderate bozos who pollute the social accord?

But be careful, the opportunity is always there for  you to join their tribe.

Posted by Bud Sparhawk at 8:04 AM No comments:

They never talk about this at the boat show, that bright moment when you stood on the deck of a glistening wonder of marine engineering, imagining how it would feel to have a brisk and steady wind striking the sail to propel you forward, always forward as  the boat heels to port, and the tiller vibrates under your hand as the rudder cuts a fine line  through the water.  At the boat show you touched the pristine decking, stroked with loving hands the rails, smelled the slight chemical aroma,  and ignored the sounds of money flowing from your bank account as you lusted to possess this wonder.

Your mind casts back to those thoughts years later as each winter's thaw drives you back to dry storage where your boat has sat neglected for long, cold months.  Then there's that stark moment of dread when you see it covered with dust and grime from the winter's storms and fierce winds and realize how much needs to be done to restore your boat to what you saw in that glorious boat show dream.

Reality bites as you start to remove the grit and grime with your wet, cold hands to expose the toll the weather, and the previous year's voyages, has taken on the bottom.  You scrape the barnacles and other growth the boat acquired and sand the hull down to its essentials, patching and filling where necessary before you begin the slow, miserable job of sanding. This is like editing a first draft; just identifying those parts that need work.

If you thought the long and dirty job of scraping and filling was hard it holds nothing to the pains accompanying applying very expensive paint while upside down with a roller that seems as intent on spraying your face as putting a smooth coating on the hull.  This is similar to the successive editing of drafts, working and reworking a section until it flows smoothly.Nevertheless you persevere until the draft and boat bottom are finished.  As you admire your work you realize that all the effort you put forth will be invisible once the boat is launched. 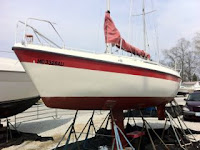 Bottom work completed, you begin the arm-wrenching, tiresome work of compounding the hull to restore luster, polishing to bring out the shine, and waxing to put a protective coat against sun and storm.  When this is done, when the only thing remaining is to launch the boat, you stand back and see that your love is once again, for a few brief moments, that lovely, wonderful object you fell in love with at the boat show.

And ready to sail once again.
Posted by Bud Sparhawk at 5:53 AM No comments:

I have a love/hate relationship with award programs since it means that I have to stop writing to read the entries if I am going to vote.  This is not easy.  My own stack-o-books and magazines is at least a year behind, yet I take the time to read all of the material I can find on the Nebula and Hugo ballots just so I can make a responsible choice.

Those eligible to vote for the Nebula and Hugo are encouraged to recommend and then vote on what they consider the "best" genre fiction written in the previous year. I'd recommend, except that I probably haven't yet stumbled upon most to the cutting edge work.  I end  up deferring the initial choice to others whose tastes are more (I hope) discerning. This may be a false hope since the process of getting work onto the ballot however is less about quality and more about politics.

There are campaigns waged among fans to get their favorites selected. Similar, but equally pervasive are campaigns among the professionals, most of whom profess to hold such boosterism in contempt.  Accusations of "claque" and "clique" fly about when awards are announced, insinuating that cabals or otherwise secretive groups manipulate the voting to their own purposes. Such machinations might indeed be true, but proof is lacking.

At the same time most professional writers are forced to promote their own works to their friends and acquaintances and anyone with ears to hear and eyes to see simply in order to survive.  It's a tough market out there and who doesn't want to be awarded something for their work if it means more respect or, more importantly, income?

It doesn't take much to get a favorite work to the top of the ballot.  Only a tiny percentage of eligible voters participate for the Nebula or Hugo and, of those who profess they have no time (or interest) in reading probably just vote for their friends.  For example, usually less than twenty percent of SFWA's active members recommended and voted for the Nebula awards and I suspect one would find similar apathy on the Hugo ballot. With such low participation the chance of garnering an award is high if a writer can get commitments from thirty of their eligible friends (the other votes will fall in your lap by random choice.) A dedicated group of thirty could probably jointly sweep the ballot, if they could decide who gets which category.  Protesting the influence of special interest groups doesn't work if people refuse to participate.  Dilution of their efforts is the only way to overcome such bias.

So, is it worth it to vote against such dedication. I think so and will attend the ceremonies, applaud the awardees, and respect the work that has gotten them there, regardless of how that happened.

Posted by Bud Sparhawk at 6:08 AM No comments: