For months I complained to my writers group (among others) bemoaning the unresponsiveness of editors and the dearth of ideas tickling my few remaining brain cells.  There was a vast swathe of not- exactly-writers-block so much as an inability to scribble more than a half coherent sentence much less an entire paragraph of an SF story.  I was willing but the ideas were not forthcoming and the gloom was deepening.  I had ten pieces in circulation and there was no word, not a peep from any editor.  This is it, I told myself, as I prepared to whimper off the field sans bang.

Then I suddenly and miraculously received four (4) acceptances in the same day!  A novella, a novelette, and two short stories.  Glory rained down from the heavens, angel voices rose in the background and happiness descended on the good.  Did I mention the (much amended) book contract being signed the same week? My virtual cup overflowed! I felt so validated that the two (2) rejections that followed did not disappoint but were submitted to other editors on my list.

After a brief celebration I realized that I now had only a few stories in the pipeline and had to get busy. It was as if the floodgates had opened and ideas, plots, situations, and stories began churning once more.  I resumed work on a novelette I had abandoned, penned another short story, sent it off, and then began another small piece.   Pop, pop, pop - off they flew, one after another to roost gods know where. My inventory of stories is building once more!

Strange what a little encouragement will do.

Posted by Bud Sparhawk at 2:40 PM No comments:

Monday morning was a big let down despite the cool temperatures and clear skies.  The reason was that I did not awaken to find myself in KC and a block away from MidAmeriCon for one more day.

The Con was wonderful.  I got to meet old friends and new, fellow writers, editors, publishers, booksellers and jewelers, and so many wonderfully praising fans (yes, I do have fans!)  I could hardly   move between sessions, which was often a half mile rush, without running into someone who I knew or who knew me. The schedule was daunting due to the SFWA Board meeting - a full day of intense and sometimes fractious discussion - and a two hour SFWA Business meeting squeezed between panels at opposite ends of the convention center.  I wonder why the WorldCon people can't find a circular center where one could minimize run distances? My full schedule made this as great an exercise as was LonCon where the distances and confusion reigned as exhausting.  But I survived and have some wonderful memories, especially of dear FRED who greeted me in the exhibition/dealers'/gamers space in the vast upper level. 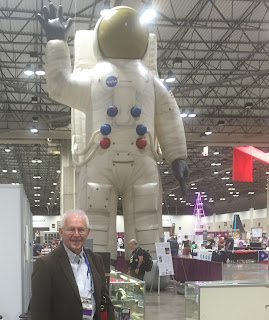 Posted by Bud Sparhawk at 9:54 AM No comments:

I hear the drumbeats of WorldCon in the distance approaching closer by the day.  I have my days carefully plotted, a time for each panel where I am participating, schedules for the SFWA Board and Business meetings, and panels I want to attend.  Yes, lunchtimes will be a challenge, dinners less so, and evenings will no doubt be spent socializing with other writers.  That leaves about forty hours I'll probably piss away with sleep, bathing, and wandering around in the dazed confusion of TOO MUCH and TOO MANY CHOICES, not to mention spontaneous hallway minicons, autographing, random encounters, and - OMG, I forgot that terrible time-sucking dealer's room visits!

Where's my time-stretcher when I need it?

That said, here is my schedule:

Posted by Bud Sparhawk at 10:26 AM No comments: