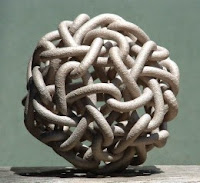 It's funny how the mind works.  After struggling with this short story that became a novelette, then a novella, and seems now doomed to wind up as a short novel for nearly a year, I can finally see the end.  Not the ending but the end of the struggle to escape the entangling plot threads that I'd wound into what appeared to be a Gordian knot.

Oh, I tried to engineer my way out of the problem(s) by plotting scene upon scene, layering details, and expanding explanatory material, throwing in flashbacks that later became explicit scenes, but appeared earlier in the story, and then just writing to be writing while hoping that I could weasel-word my way to a decent conclusion.

So I introduced a new character. Yeah, the dumbest thing I could do.  That introduction threw in several skeins of interactions, dialogue, and settings, that screwed up the plot even more.  Just what I needed was gathering more rope to tie around my hopelessly tangled plot. "Throw it away,"  I screamed and tried to convince myself to just give up and write something --anything-- else. This is my normal reaction to frustration and has resulted in a basketful of "something else's." Instead, I took a few days off to clear my mind, step back, and then look at the mess from a reader's perspective.

That's when something clicked.  Suddenly I saw how to untangle the knot that was holding me back, the critical knotted cord that tied everything else together.  If I tugged here, unwrapped that there, and combined those vagrant pieces of frayed rope, and then wrote another thousand word string on the nature of belief I could create something I could work with.  At this first draft stage a story doesn't have to be good, or even readable.

It just has to be done.

Posted by Bud Sparhawk at 9:18 AM No comments:

To be perfectly clear, the discussion on pantsing vs plotting has been ongoing since our first fateful discussion at Capclave.  Since then we’ve given several talks on our differences at various science fiction conventions. If you are at one of these you might drop into our panels to perhaps get a more detailed explanation of how we use our writing tools for pantsing and plotting  .

Jamie Todd took exception in his blog  at my characterization of his approach to writing and, like the typical pantser that he is, failed to appreciate the nuances of my objective assessment.  Case in point, he said:

When I try to plot out my stories, the result is stories that are too neatly plotted ….[these] stories I write organically, without planning every step of the way, have sold faster, and in general been more successful than those that I have carefully plotted out…… Would a music teacher say that it is a wasteful to practice your scales? Would a medical school professor tell students it is a waste of time and talent to intern?
The reason his attempts at plotting fail is that he takes things to extremes.  One does not lay out every mile of a road trip before leaving the driveway.  Instead one identifies the major landmarks, estimates the distances, and ensures that everything is properly packed in advance. The essence of plotting is to identify key scenes that lead the reader to a satisfactory conclusion.  He further accuses me of being one “who plot everything out ahead of time.”  Which is a gross mischaracterization: I merely plot the key points, identify the emotional highs and lows, where humor might play a part, and when bathos or pathos is useful.
He goes on to declare the inefficiency of pantsing, including articles to bolster his numbers instead of confining the argument to writing short stories.
I haven’t missed a day in 656 days now [and have] written 575,000 words ….prior to writing every day, I sold 1 story on average every 3 years. Since my writing streak started, I’ve sold one story or article every 45 days.
To counter that I would point out that Jamie started submitting stories in 1992, coincidentally the same year I began writing again after a fourteen- year hiatus.  Since then I’ve sold about four or five shorts, novelettes, or novellas each year plus produced several novels (some of which were actually published.)  Since I only sell about 20% of what I write I would argue that the two of us are equally productive*.
To be honest our differences are those of scale. While I like setting  up scenes in advance I never know what my muse wants to say until I reach the scene knowing only the character, setting, and the main thrust of what must take place.  Jamie says:
Plotting out things ahead of time has the same effect on me as talking about my stories: it spoils the excitement of the story.
In that sense I am a plotter only at the design stage of development and fall into pantser mode at the development level.  I usually return to plotting (as described in my Ten Stages of Story Development blog post and in a recent SFWA Bulletin article) after the first draft.  This most often involves rearranging scenes or parts of scenes and cutting, cutting, cutting precious words that do not inform the plot. Words are my children and I regret losing a one even though I often see the necessity of doing so.
In the end I must say that although we differ in doing our initial drafts we both use a mixture of plotting and pantsing where and when needed.  In that sense, we continually struggle with how to best harness our muse to do the difficult work of crafting a good story from the raw stuff of imagination and creativity.
We’re writers, damnit!
*I know that sort of spoils my efficiency argument.

#SFWApro
Posted by Bud Sparhawk at 8:23 AM No comments:

I'm sharing this blog with Jamie Todd Rubin who will probably rebutt my descriptions from his blog.

We will start as storytellers are wont to do by reciting a bit of history about ourselves and this discussion.  It started in a bar at Capclave when we were talking about how to write short stories and realized that we approached drafting our stories somewhat differently.  To put it simply, Jamie writes by the seat of his pants --which is akin to running with scissors IMHO-- while I choose the wiser and more prudent course of carefully plotting my works.

Jamie throws words down at a prodigious rate, striving to produce a MINIMUM of one thousand words a day.  This would give him three hard SF books a year or one and a half fantasy novel were those 365,000 words useful.  Instead, due to his hasty and impetuous headlong dash to finish something he has to throw out most of his words, edit with a chainsaw, and rewriting practically everything.  From this I draw the conclusion that writing by the seat of your pants is wasteful of time and talent.

I, on the other hand, take a more deliberate route to a conclusion that I know before the first letter of the first word on the first page appears on my screen.  I know in advance the scenes necessary to reach a foregone conclusion and am able to sketch in characters, settings, and times for each.  The work of then forging the story around the various elements becomes an exercise in creativity and planning.  My first draft is usually poorly organized but I can easily rearrange or edit the scenes to convey the sense of story I intend.  Sadly, the ending I know with such certainty at the outset rarely survives the first draft and sometimes is even changed on the galleys.


#SFWApro
Posted by Bud Sparhawk at 10:14 AM No comments:

This is the 250th article in this blog stream, a number I never imagined achieving when I started a few years ago.  My original idea was to put down my thoughts on the process of writing in hopes that by doing so I could determine the science behind whatever I did when I write a story.  Little did I know that it would soon turn into a litany on the  misery of being a short fiction writer struggling to have a voice in the SF genre.  On that last point, I hope that by expressing my frustrations I gave voice to those of you facing similar struggles.

To this day I have not achieved my original purpose. Instead I've wandered all over the territory, talking about whatever came to mind as I struggled with one demon or another as I fought to put words to thought and thought to paper.  To this day I still do not have a clue.

In fact, I've come to realize that I've done more erasing than creating.  I am continually modifying a word, a phrase, a paragraph or a scene to express some element of an emerging plot.  Too often that plot morphs as the words tumble forth.  I've often said that I always set out knowing the end, but the ending is never what I intended at the outset.

Some articles have had huge responses and others that I thought significant passed without apparent impact.  Some have been banal, a few funny, and others dead serious but overall they have been an honest reflection of my thoughts.  For those of you who follow this blog I promise to continue in the same vein and for those occasional visitors I hope you enjoy paging through some of the most popular ones.


#SFWApro
Posted by Bud Sparhawk at 10:13 AM No comments: