Last year, with unwarranted confidence, I wrote knowingly about the ten stages of story development and then, in a fit of hubris, decided to bare my soul by documenting what happened as I followed the process while developing a story from scratch, which means at the outset I knew little to nothing about the universe to which I was supposed to contribute  (My struggles were documented in subsequent blogs.) 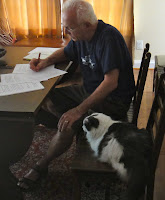 The effort was not pretty, but I persevered and managed to stagger to the tenth stage, which, I realized, wasn't the last stage at all.  More needed to be done and,  as beta readers, editors, copy editors, etc, etc, etc became involved, successive stages had to be completed before the final version is released to the wild where it will live or die on its merits.

What I didn't realize was how much that exercise clarified my thoughts on this somewhat ugly business of actually creating and crafting a story.  Since then I've expounded my views on con panels and in a couple of interviews where, I'm afraid, I too often sound like an egotist and an idiot - one of which I am not (I hope.)

Those reflections and thoughts have also improved my dialogue with other writers, many of whom share the same self-doubts, frustrations, and developmental challenges and welcome any discussion of same. This was brought out at Confluence last weekend where the hallway conversations were equally as intellectually as stimulating as most of the panel discussions.  The unintended consequence was that the panelists became excessively self- referential, as in "As I was saying to Rob Sawyer earlier today ...."  I'll admit to doing that myself.  It works at a literary con like Confluence where everybody seems to know everyone else (and embraces the printed word!)

So, to clarify my own thoughts I am going to revise the screed and come up with some way to codify exactly what it is that I do when I try to write (and finish!) something new.  Stay tuned as this may take some time.

Posted by Bud Sparhawk at 7:52 AM No comments:

The Joys of Acceptance

Just as a rejection might send you into fits of depression, anger, or despair, the arrival of an acceptance notification generates a degree of bliss not to be matched.  You might smile, dance a jig, hoot and holler, mention it (aka "bragging") to a friend, or fire off one or more social blasts to let the world know that; YES, YES, YES; you are a writer and an editor actually likes your work. Soon the entire world will see what you have produced.  Your joy is unbounded.

But publication is never immediate so there comes the impatient wait for publication, an agonizing delay of weeks or months - even years for novelists - as the manuscript is turned into whatever mode the publication needs.  The days drag by, you nervously fret that they've somehow screwed things up, the editor's had second thoughts, or that the publication will fold, dooming your story to the trash can.  Even the galley review hasn't curbed your impatience.  When is the damn thing going to appear, you ask?

Then the fateful day arrives. Once again you flood your social medium with links and beg your friends to glance at it.  If it is a print publication your cherish your precious author's copies, place them on your brag shelf, or maybe even read your words once more, savoring each exquisitely turn of phrase.  You might go to the local bookstand and hang out by the display, waiting for someone to pick up the magazine and wondering if you will be brazen enough to say "Hey, I've got a story in there.  Want me to autograph it?"  This thought fades after a few unproductive hours of waiting and getting suspicious glances from the security guard and a few young mothers who worry about you are standing so close to the teen magazines.

Finally, as all writers must, you return to your wordsmithing anvil to forge yet another tale, a few more pages of the novel, or improve a passage in something you have in seemingly perpetual draft.  The acceptance lies now in your past; an acknowledgement that you had accomplished something wonderful or, if you are more modest, acceptable.

You now know that you are a writer.
Posted by Bud Sparhawk at 9:08 AM No comments:

The Truth about Rejections

They'll tell you that a rejection isn't personal, that the editor is only rejecting the story, not you.

But deep inside your writerly core, the secret place that contains your hopes and dreams, you know that is untrue.  Any rejection feels like an arrow piecing your heart, its barbs inflicting deep wounds that will leave tender scars  on your psyche. A rejection is a personal affront, it's saying that you are not worthy of being published and all of the hours you sweated to polish that story to perfection are as nothing. In a word, rejection feels like failure.

So, what can you do? You can bite your lip, bitch and moan about the unfairness of it all to anyone nearby, curse the editor as a philistine, and even decide to never, ever submit to them again (a promise I've never been able to keep.) you can even mumble "I'll show that %^$# editor," as you submit it elsewhere and continue to create.

Doing any or all of that is fine, but it doesn't change the fact that you have been cast aside.

Rejection hurts!
Posted by Bud Sparhawk at 8:20 AM No comments:

This is what bothers me:  After nearly twenty years of writing short stories and occasionally selling one or two, I have to face the prospect that perhaps I've overstayed my welcome, that perhaps my talent has at last played out, that my race is run, the tide is going out, the dark night approaches and all of those other literary allusions that are trite and boring when endlessly repeated redundantly over and over ... well, you get the idea.

The bitter fact that writers have limited periods of productivity, that they eventually outlive their fan base or face a dearth of ideas, which is a particularly horrid fate for the short story writer who depends on expressing ideas engagingly as opposed to story, came to my mind as I read a pair of related blogs by Sarah Hoyt and Kay Kenyon dealing with similar issues. Apparently I am not the only one who is bothered by these inner voices of doubt and fear of failure.

This is not the first time I've dealt with the problem of writerly mortality.  In fact, I think of this at least three times a week, more often when the brain stutters and spits, seeking a word that will just not materialize to complete the sentence or when the plot wanders aimlessly off the reservation into areas I hadn't intended or when a character suddenly changes from a brilliant puppet into a wooden soldier who is unable to squeeze a single emotion from his all too solid frame. Yeah, that's when the doubts arise.
So I ask myself when might be a good time to call it quits, to fold the tent and ... no, no, no - I won't go there again or we'll all die of metaphoric or analogical metastasis.

I honestly don't know when you can tell that it's a good time to quit - after a year of no sales, after the four hundredth rejection, or after the ideas stop exciting you awake in the night? What are the signs that you are finished? Can you tell? Will anyone whisper it to you at some obscure little con - the only ones that seem to welcome you?  Is there a right time, a good time, a proper time to vacate the stage for those pesky young upstarts?

I think the time might be right, but before quitting I have a few things to finish, such as the novel that I've nearly finished rewriting, the one I have half done and the other one sadly left in outline, not to mention the sixteen short stories in various draft stages, the ones in eternal circulation hell, and the nifty Sam Boone idea I sketched out this morning after coffee and ..... Crap, looks like I'll have to resign myself to keep pecking away at the keys until those few things are completed, that is, if something else doesn't come up.

And maybe not having "something else" is the sign when I'll know for certain that it's time to quit.

Posted by Bud Sparhawk at 9:21 AM No comments:

After a two week hiatus from writing I sat down to continue the slogging, tedious process of revising/rewriting/editing my novel - a task involving rephrasing about one sentence out of ten and changing the novel's singular point of view to the more reader-friendly third person.  As I said; tedious, but necessary: I do want to finish this piece once and for all.

So, after getting through another ten or twenty pages, a little idea for a story that had occurred to me while enjoying my breakfast coffee with a blueberry muffin in frigid Portland bubbled to the surface of my mind and demanded that I pay attention.  It was a mosquito bite of irritation; a gnat's itch that would not cease as I struggled to concentrate on the work at hand.  It was an insistent, demanding irritation that intruded into every thought.  I've know this itch before and what it portended.

In a recent interview Stephen King mentioned that he never wrote down his story ideas.  If an idea has merit,  he contended, it will rise for attention when needed.   Itch, itch, itch the little story idea continued to plague me for another page where I finally yielded.  I put the novel aside, brought up a blank screen with the idea of writing an outline, scene sketches as it were that I would put aside for later, after finishing the novel.


Blocking the scenes came so easily that I knew my muse must have been working at the plot, the emotional levels, and the settings without informing the my conscious mind.  That she was active while I was preoccupied became evident as the words, the descriptions, the incidents, people, dialogue, and characterizations rolled so effortlessly onto the screen.  Usually I struggle with plot and wrestle each paragraph to submission before endlessly editing and rewriting until I finally abandon the entire effort to submission.  Only on rare occasions does my muse allow me to write so flawlessly.

Four hours later I had the entire story mapped out in ten scenes and had written three thousand words leading up to the key scene, where I stopped.  The flow of the narrative and evocation of scenes had been so painless that I could have continued to the end, but I wanted - needed - to do THAT scene with fresh eyes and a clear mind.

Ask me how this happened and I reply that the words flowed like liquid gold, pouring into the plot as the characters, dialogues, scenes, and incidents grew in cascading profusion and without effort.  It was as if someone apart was dictating to give birth to this story.  It is a process I cannot understand, feel exceptionally blessed when it happens, and wish I could evoke every time I sit down to write.

This story will probably be finished by this evening I'm sure and then it is back to the workbench to pound out another few pages, edit unfinished materials that are trying to get my attention, and do the mundane things life demands of us so I can continue to follow my bliss and write.

Posted by Bud Sparhawk at 10:28 AM No comments: